Multiplying disciples and churches in Tonga 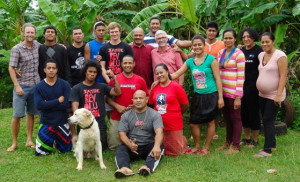 I’ve recently returned to Honiarafrom a 2-week trip to Tonga. I was on the island of Vava’u. Vava’u is an hour’s plane flight north of the main island of Tonga. To get there you fly on one of the most dangerous commercial planes in the world, the Chinese MA60, now that was a sobering experience.

Vava’u is a very beautiful place. However, I wasn’t there for a holiday I’d been asked to come and train. Tonga is meant to be a Christian kingdom but the reality is very different. People are religious, everything shuts on Sundays, many people are in churches but most people have not accepted the good news of Jesus. So, I was asked to come and train and equip believers in how to reach their people. An added ‘bonus’ for this trip was not everyone in Tonga speaks English so this time I got to train and be translated. The great thing is God showed up as I trained.

Let me tell you about Tito. Tito is a bit of a ‘wag’, he likes to kid around however he took hold of the training. On the Monday he went out on the street to meet people with another young guy, Jacob. Down near the market they met someone Tito knew from a nearby village and shared the gospel with him, he believed. Then they arranged to follow him up because we are trying to make disciples not just getting people praying a prayer. The next day Tito and Jacob went into town again and met a girl Tito knows. Tito told his story, then shared about Jesus and the girl believed. The next day they caught up with this girl again and took her through the first of the simple discipling lessons. At the end Tito and Jacob challenged this girl to tell 5 of her friends about Jesus and the change in her life. By Friday she hadled her sister to faith in Jesus, in the next week she led another 2 friends to Jesus, and the discipling continues.

The training is simple. It’s easy to remember and to pass on to someone else. We practice everything before we go. For the first time everyone who was trained in Tonga passed the training on to others. Some of the key tools I gave people are: how to tell their story of believing and following Jesus, in 3 minutes. Even in cultures where time is slower 3 minutes works. I train them in a simple gospel presentation, just enough of the gospel of Jesus for someone to believe. I introduced them to Share Jesus Without Fear. It works because at the end of the training at least 3 people commented the best thing for them was finding out how to share about Jesus without fear. I helped people see the importance of meeting in houses with plenty of evidence from the New Testament. Then I train people in how to lead a group in a home where people are discipled. I train people how to pass it on so others are trained and how they then train others who train others.

Another young man at the training is Tesi. Tesi partnered up with Sione and together they went to the village next door to where we were meeting. The first house they went to was Tesi’s mum. Tesi told his story of believing in Jesus, he had never told his mum. Then he asked if she would like to know more and using ‘Share Jesus Without Fear’ Tesi’s mum understood and believed. Then they arranged to come back. Tesi and Sione went to another house, were invited in, and going through the same stories the lady believed and prayed. The next day they went back and met with Tesi’s mum and began discipling her. At the next house the lady there had her whole family with her to hear from Tesi and Sione so they shared again and began discipling the whole family.

In the training we talk about baptism, it’s the second lesson. We don’t just talk we get everyone to practice what to do and say. You could say we have a dry run! None of the Tongan’s in the room had ever baptized anyone before and it was a great activity. As I am leading a session and teach that baptism is the next step for obedient disciples. My translator, Vuki, then says jokingly that Tesi needs to get baptized first. Even as I trained God had been challenging Tesi. So the next day Sione baptized Tesi and another young man Lo.

There are so many stories as people were obedient disciples. From these few days of training there are now over 150 believers. Meetings have begun in at least many homes and at one of the local schools where people are being discipled. Another young man has travelled to his home island to train people there. Zack my main man in Tonga has an invitation to train more people who couldn’t make this training. The good news continues to spread.